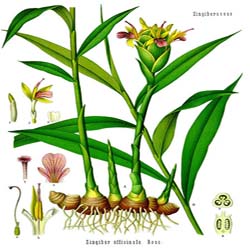 
[Top]
The herb belongs to the Zingiberaceae family which is the same family as tumeric and cardamon. It is native to South Asia. Cultivation is believe to have then spread to East Africa as well as the Caribbean. The present name is derived from the middle English word gingivere. However the root dates back as far as 3000 years to the Sanskrit name smgaveram. which means horn root.

What it is used for


[Top]
It is of course a very popular cooking spice, it is also used in aromatherapy. The herb is widely used in traditional medicine across the world. In Japanese herbal medicine, it is used for blood circulation. They use dried gingers which are called shokyo. When it is steamed, they call it Kankyo. They use the sun to dry out the herb. In Traditional Chinese medicine it is also done this way. It is also heated in and dried in pans, some times with hot sand. In TCM the herb is used to treat colic, diarrhoea, indigestion, nausea, heart conditions, arthritis, menstrual cramps, colds, headaches and flu. In ayurvedic medicine it is known as sunthi. It is used to treat various digestion problems as well as arthritis. In the Philippines it is called luya and it is used to treat sore throats, they also use it to make a tea which is called salabat. In the U.S many flu and cold, anti nausea and digestive dietary supplements have it as a ingredient. In Burma, it is boiled together with Htan nyat (a sweetener created out of palm tree juice) and drunk for flu prevention In the Congo, it is squashed and mixed together with sap from the mango tree to create a medicinal drink.

In a study carried out by researchers in Atlanta, Georgia State University, mice were fed the herb on a daily basis. The results show that prostate cancer cells were inhibited and destroyed. Source: http://www.ncbi.nlm.nih.gov/pubmed/21849094 Another study in American again showed that the herb hibited the growwth of ovarian cancer cells. http://www.ncbi.nlm.nih.gov/pmc/articles/PMC2241638/

Researchers in Thailand tested the efficacy of the herb and dimenhydrinate on pregant women who had morning sickness. The tests were done on 170 pregnant women who attended the antinatal clinic. They were split into two groups. Group one were given a capsule with the herb in powdered form inside it, twice a day. The second group were given a capsule with dimenhydrinate inside, again twice daily. The results show that the herb was just as effective as dimenhydrinate with the added bonus of having less side effects. http://www.ncbi.nlm.nih.gov/pubmed/17957907

Researchers used a crude extract of the herb and a more sophisticated extract containing gingerol an important ingrediant of the herb, on an animal model of arthritis. Both extracts inhibted joint swelling, leave researchers to conclude that non gingerol components enhanced the antiarthitic effects of gingerols. http://www.ncbi.nlm.nih.gov/pmc/articles/PMC2837120/#__ffn_sectitle

Grind the herb with an equal amount of coriander seeds until it turns into powder. That this mixture 3 times a day with water.

Mix it with cumin and rock salt after your meals to stop diarrhea.

Run a hot bath and put half a cup of grated ginger in. This will make you sweat out toxins and get rid of any aches and pains.

Create a juice by first peeling and grating the herb then squeezing it out into a cup, then mix with honey, lemon juice and mint juice.

Cautions and side effects


[Top]
It has few side effects when taken in little doses. If consuming too much, the reported side effects include bloating, heartburn, nausea and gas. These effects are usually associated with the powdered form of the herb.