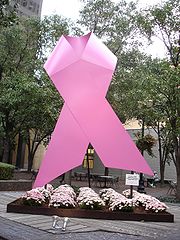 I find this story that I found on the BBC news website rather disturbing.
Black women in the UK are more likely to get breast cancer than white women.
This is based on research from the University of Southampton. They looked at the data of 3000 women in the UK and 118 of those were black and all of the women whenb they were diagnosed were younger than 40.

The study shows they have more aggressive and larger tumors and larger risk of recurrence.

The investigators say this could be due to unidentified biological factors.
They go on to say it could be the women don't respond very well to tamoxifen and other breast cancer drugs because of the way their tumor is genetically made.

Such women might respond less well to breast cancer drugs like tamoxifen because of the genetic make-up of their tumour, they say.

Another thing they say is that there have been similar results in the U.S which could be a worldwide trend.

I have not seen the research done in the U.S that they refer to but this study in the UK seems a pretty small study to be drawing such conclusions on.

They go on to say language barriers or recent immigration may affect their usage of health services.

They have not said where these women were from I just assumed that they were black women born and bred in the UK.

I decided to look into this in more detail on the cancer research uk site it says
that surveys in the U.S and England show white women are at higher risk of getting breast cancer than women from other ethnic backgrounds due in part to lifestyle factors.

I then decided to have a look at the pubmed website because that is always a good source for scientific research, I looked at two bits of research that backed up what UK researchers were saying about the U.S.

I would suggest that at least in the U.S that the prevalence of breast cancer in African american women is due to social economic factors rather than genetic factors.

Research again from the pubmed website would seemingly back this up.
http://www.ncbi.nlm.nih.gov/pubmed/15822829

Leslie Science & Nature Center, staff members in Ann Arbor are visiting the hospitals from 11 a.m. to 2 p.m., once a month presenting programs that link patients, families and hospital staff to the natural world.

Administrators of the Leslie Science & Nature Center said that being involved with nature can help the body, mind, and soul.

The program was first divised in 2012. The staff of the centers worked together to come up with different themes, such as vistors making leaf rubbings, looking at books and pictures about animals living in the Michigan woodlands, exploring different types of trees and examining tree slices to find out its age.

Today the program is even more wider.

I used to these kind of activities back in school and it was something that every body looked forward to it. In the ways to manage stress page, I also mention walking trough nature as a way to manage stress.

According to a new study drinking sugar-sweetened beverages increases the risk of endometrial cancer in postmenopausal women.

Detailed questionnaires about medical history, lifestyle and diet were completed in 1986 by 23,039 women.


They were followed on an annual basis from 1986 to 2010 for cancer incidence.Overall 506 Type one endometrial cancers were discovered and 89 Type two.

Furthermore the study found all sugars boosted the risk of someone getting Type one endometrial cancer, however they found that sugar-sweetened drinks increased the risk the most.

The lead author, Maki Inoue-Choi, said he did not want people to change their habits based on the findings. He said more study was needed to confirm the link.

But advised people to follow the dietary guidelines and avoid any sugar-sweetened beverages.

Well if the link is confirmed that it is another reason of a list of long reasons not to drink sugary drinks.

If you're struggling to give up, watch this excellent short Australian ad.

Food poverty in the Uk

Food poverty in the UK has now become such a big problem that it should be seen as a "public health emergency", health experts says.

According to six leading health experts, the UK is suffering a big food poverty problem to the extent that is should be viewed as an public health emergency.

The experts wrote to the BMJ (British Medical Journal) warning that bad nutrition might lead to a number of health problems.

The Red Cross has begun to ask for food donations, the last time they call for donations was during World War Two.

The Trussell trust has 400 food banks, they said that the number of people they are helping has now tripled to 350,000.

The experts also cited research showing that money spent on food by households have fallen by 8% over the past five years.

I think the poorest have been struggling for sometime now with regards to food.Shops do make it very difficult for people to eat healthily, unhealthy food seems to be a lot cheaper then healthy food.

The tragedy of this is that supermarkets throw away lots of food everyday and most of is perfectly edible.


Dumpster diving is the practice of getting food and other useful items from rubbish is gaining in popularity. This short three minute video shows the perfectly edible food that can be obtained from a dumpster


In England and Wales dumpster diving may qualify as theft or in Scotland as common law theft.

In 2011, Chelmsford Crown Court, a woman was given a 12-month conditional discharge for handling stolen goods. She accepted pies, potato waffles and 100 packets of ham that a dumpster diver offered who had obtained them from a bin which was outside Tesco Express.

It is a crazy world we're living in folks.